Healing through art, stories, and music

We pause at the crossroads — after more than a year of COVID, climate change, and racial reckoning, we have choices to make about how we move forward. Join us in community to find a path toward healing through interactive art making, storytelling, and music. All day, you’ll be able to participate in paper lantern, and Japanese boat model demonstrations and activities. At 11 a.m. and again at 2 p.m. a 90-minute performance featuring Asian artists living in diaspora will begin outside with taiko drumming and then wend its way into the museum for more, including spoken word, koto music, and lantern-lighting that will help us illuminate the path toward a more empowered future.

Enjoy this performance from SF Koto Group Hanaikada of 花は咲く Hana wa saku (2013) “Flowers will bloom.” The song commemorates the 2011 tsunami and earthquake in Japan.

Join Rochelle P. Lum in learning how to make two washi ningyo dolls:
a man and a woman. 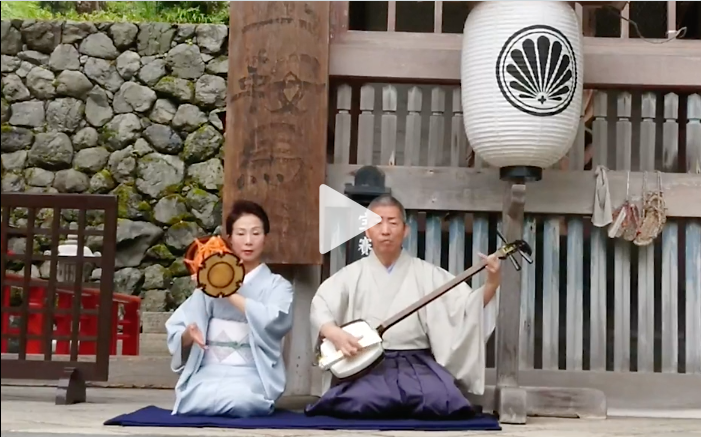 Nozawa Matsuya and his wife Miki (Matsuya Miki (松也美紀)）play at the entrance gate of Kurayama Temple, this is the place where the fabled story of  the duel between Ushiwakamaru and Musashibo Benkei occurred.

It is a favorite subject in Japanese art is the duel between Ushiwakamaru (the childhood name of Minamoto Yoshitsune) and the renegade monk Musashibō Benkei on Gojō (5th Avenue) Bridge in Kyoto. Having vowed to take 1000 swords away from their owners, Benkei had collected 999 when he spotted a youth wearing a richly decorated sword. His demand for the sword refused, Benkei attacked. But Yoshitsune, who had been trained by tengu (long-nosed goblins who could fly and were legendary masters of swordsmanship), leaped high in the air to strike the monk. Benkei conceded and became Yoshitsune’s faithful follower. In the war with the Taira, Yoshitsune won victory after amazing victory, but this only fueled the jealousy of Yoshitsune’s older brother, the future shogun Yoritomo. In the end, cornered by Yoritomo’s forces, Benkei dies while fighting off the enemy to give his lord enough time to commit seppuku, or ritual suicide.

Japanese dance classes: join us as we cover the basics from preparation to fundamental etiquette, and general movements for bon odori (minyo style dances for Obon, a Buddhist celebration).

Episodes will be released weekly! Follow our Facebook event page to receive updates or check back on this page to view the videos.

Episode 1: How to put on a kimono