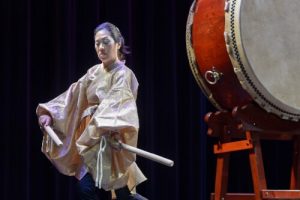 Melody Takata is Festival Director of Japan Week and the founder of GenRyu Arts. She is a multi-faceted artist trained in Japanese Classical Dance, Taiko and Shamisen.  Sensei Takata has been performing for over 20 years in Japan and U.S.A.  Takata grew up in the Japanese American community of Los Angeles with a rich experience in traditional arts. From age 8 she learned odori (Japanese dance) at the Nishi Hongwanji as part of the obon festival ritual (festival honoring ancestors).  At age 10 she began formal study of Nihon Buyo (formal name for Japanese classical dance) at the Fujima School and has performed dance at numerous theater works under Madame Fujima Kansuma until age 20.  From age 13 to 18 she studied shamisen with the Kineya School.  At 15 she began studying and performing with Los Angeles Matsuri and at 20 traveled to Japan to study and later perform as a member of Tokyo’s O Edo Sukeroku Taiko, one of Japan’s most highly renowned taiko ensembles. Ms. Takata completed the ACTA master apprentice program for 2002-2003 on shamisen with Hideko Nakajima Sensei.  Most recently, Ms. Takata has reestablished study with Madame Fujima Kansuma in Los Angeles to strengthen her integrity of Nihon buyo and to ensure a high standard of integration of odori into Gen Taiko’s repertoire.