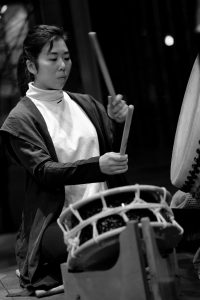 Kioto Aoki is a performing artist specializing in Japanese traditional music, playing taiko, tsuzumi, and shamisen. She has been performing on stage since the age of 7, touring nationally and internationally, and is active within the experimental and creative music scene in Chicago and the Bay Area as a member of Asian Improv aRts Midwest (AIMRW) and Tatsu Aoki’s The Miyumi Project.  Kioto is an instructor at Tsukasa Taiko, a program of AIRMW as well as curatorial manager of the Arts Incubation program.  Notable projects include Yoko Ono’s Skylanding Project, and the  Taiko Legacy/Reduction series at the Museum of Contemporary Art Chicago. She is a past and current recipient of the Ethnic and Folk Arts Master Apprentice Program from the Illinois Arts Council.
Kioto is also a conceptual photographer and experimental filmmaker who also makes books and installations engaging the material specificity of the analogue image and image-making process. She received her MFA and BFA from The School of the Art Institute of Chicago is a 2017-2018 HATCH artist in resident at the Chicago Artists Coalition. https://kiotoaoki.com/